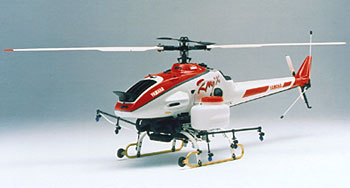 During the development stage of the RMAX helicopter, the specs for the various components were determined by taking the following three priorities into consideration: 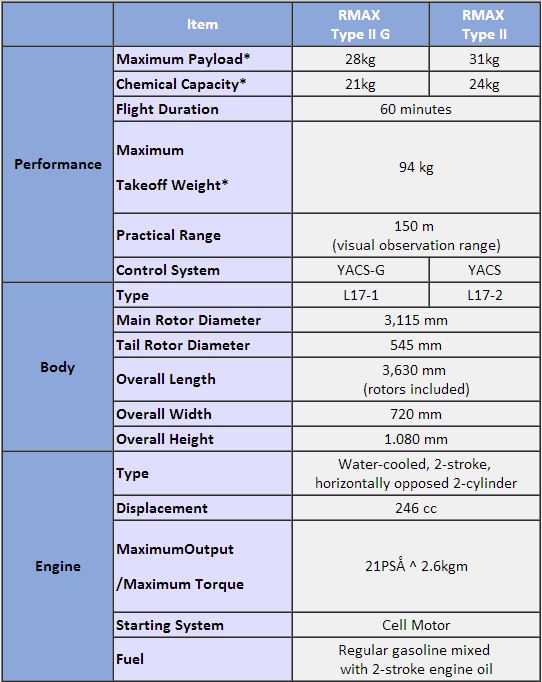 An exciting world of uses for Yamaha unmanned helicopters

Images from the Autonomous Flight RMAX’s CCD camera appear real-time on the PC screen so the operator feels like he is in the pilot’s seat.

In the spring of 2003, Yamaha released the “RMAX Type II G” as the latest development in its RMAX series utility-use unmanned helicopters that first debuted in 1998. The “G” in the new model name stands for the Geographic Positioning System (GPS) technology it mounts and it also boasts major improvements in speed control.

Since its release, the first-year target for RMAX sales of 200 units has already been reached. Presently about 1,600 unmanned helicopters are in use in Japan’s farming industry for crop dusting and other countries are starting to notice the potential of these helicopters.

Yamaha’s control technologies have also made possible an autonomous flight version of the RMAX that can fly complete flight patterns pre-programmed on a personal computer with no manual remote-control operation necessary. This “Autonomous Flight RMAX” mounts two GPS sensors and other control equipment that enable it to fly constantly within 20 or 30 centimeters of the prescribed flight course. What’s more, when the flight course takes the helicopter out of visual range of the ground operator, the CCD cameras it mounts allow operators to follow the flight progress visually on the PC screen as if they were actually riding in the helicopter.

As was featured in Yamaha News two years ago, this autonomous flight RMAX has already been used for such missions as observation of an erupting volcano in 2000. In 2002, units of this helicopter were supplied to several organizations including the Ministry of Land, Infrastructure and Transport for jobs like river observation and disaster area surveys. And inquiries and orders for these helicopters are starting to pour in from around the world.

In July 2003, the outstanding performance and technologies of the Yamaha RMAX drew much attention when it was demonstrated at an unmanned aircraft exhibition in the U.S. sponsored by the U.S. Navy and the AUVSI and again at other aeronautics shows held after that in nearby cities.

Thanks to attention like this, YMC’s Aeronautic Operations presently receive about 20 inquiries a month from overseas institutions. “We are getting inquiries from government and military officials, major aircraft manufacturers, private-sector research organizations, all types of groups. The world is rapidly coming to recognize the value of Yamaha’s unmanned helicopters” adds Mr. Itagaki.

Agricultural applications of the RMAX helicopter

In the United States, the application of chemicals and seeds from manned airplanes or helicopters gained force early on. This type of application also gained some acceptance in Japan. However, it involved a relatively high cost for the small area of land cultivated per farm household in Japan, and the overspray of the chemicals to the surrounding areas posed problems. Thus, its expansion encountered a standstill.

The reduced number of people working on the farm, and the departure of the younger generation from the farming communities in particular posed a serious problem. Thus, farm work required radical reform. Some ten years have elapsed since Yamaha started the development and sale of practical unmanned industrial helicopters aimed at realizing affluent farming communities.

Today, Yamaha helicopters have fully taken root as the mainstay system for the insect pest control of rice paddies, soybeans, and wheat. Thus, the insect pest control area coverage of Yamaha helicopters has increased by leaps and bounds. This is due in part to the materialization of the low-energy, low-cost production technology under the agricultural policy and the production of environmentally friendly farm products.

Based on the trust gained through community-oriented customer support, track record, and reliable technology in production, further expansion of the Yamaha unmanned industrial helicopters is anticipated as a solution for various problems facing the farming communities in Japan and as a contributor to raising the level of food self-sufficiency.