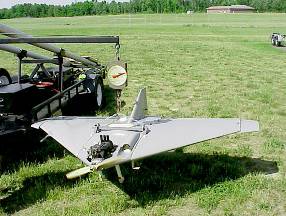 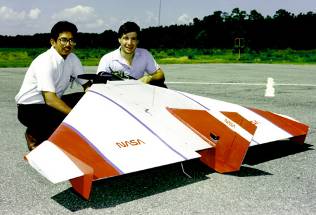 BAI Aerosystems has manufactured the Exdrone UAV continuously since the mid 1980's. Since then, technology advancements have enabled BAI to make many product improvements to the system and the Exdrone's capabilities now rival those of much larger, more costly systems. Hundreds of Exdrones have been manufactured by BAI, making it one of the most produced UAV ever created.

The Exdrone UAV features a symmetrical delta-wing air vehicle, moulded from fibreglass-epoxy composite material. This air vehicle design has been studied by NASA and been proven through hundreds of flight hours, including operational deployment during Operation Desert Storm. Exdrone offers a cost-effective means to perform reconnaissance and surveillance and has also been used to deploy small sensors and dispenser systems.

The Exdrone is launched from a trailer-mounted pneumatic launcher and may be either skid-landed on an improved surface, or, recovered using an optional parachute system. Total all-up weight is approximately 45.4 Kg, with a cruise speed of 145 Kph. Exdrone has a demonstrated effective range of 80.5 Km, with flight endurance of over two hours.