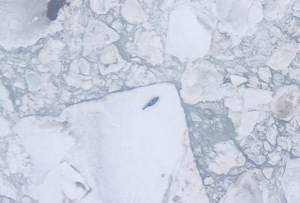 The ScanEagle unmanned aircraft captured this image of a ribbon seal (the dark shape in the center of the photo) on Bering Sea ice.

Scientists have successfully deployed an unmanned drone over the frozen ocean to spy on the vagaries of seals in the impenetrable winter wilderness of floes and bergs off Alaska's west coast, a Colorado scientist reported last week at the fall meeting of the American Geophysical Union in San Francisco.

"Biologists are thrilled about the image recognition software because it could change the way we monitor seal populations," says lead researcher Elizabeth Weatherhead. "We can send an unmanned craft out from a ship, collect 4,000 images, and have them analyzed before dinner."

Originally designed for intelligence and military recon by Boeing, the ScanEagle has a 10-foot wingspan, with the capability to loiter at low elevation or soar as high as 16,000 feet. This particular aircraft, operated by the University of Alaska, flew sorties in May and June of 2009 over the Bering Sea from the NOAA vessel McArthur II -- recording 27,000 images that ultimately contained seals, according to Weatherhead, a senior scientist at the Cooperative Institute for Research in Environmental Sciences, a joint venture of CU-Boulder and the National Oceanic and Atmospheric Administration.

Alaska's ScanEagle weighs 27 pounds loaded with gear and fuel, and can fly for 20 hours at speeds up to 75 knots. While the ScanEagle snapped pics and video of jostling bergs and offered insight into the behavior of the ice pack, it was the use of new image recognition software by Boulder Labs Inc. that helped pinpoint the hard-to-find, fish-eating mammals. "The results show that the seals have distinct preferences for specific types of ice, demonstrating that ice extent is not the only factor affecting seal populations," Weatherhead says.

The researchers have created a sort of "Where's the Seal" game, demonstrating how difficult it is to find seals hauled out on the surface. If you want to test the "image recognition software" loaded in your own personal brain, give it a try.

The Multiplex Funjet that flew in the Arctic Circle

A Norwegian university has flown an autonomous unmanned air vehicle equipped with meteorological sensors over the Spitzbergen/Svalbard island in the arctic circle in temperatures of -20 degrees C, winds up to 15m/s and at an altitude of 4,900 ft (1,500m).

The Multiplex Funjet UAV was modified with electronics for open-source Paparazzi autopilot software by the Geophysical Institute of the University of Bergen , in partnership with Hildesheim, Germany based-Martin Mueller Engineering, a small UAV company. It is being used to collect enviromental data on temperature, humidity, pressure and wind.

Martin Mueller installed a larger propeller on the 70 cm-wingspan, 80cm-long Funjet to improve take-off performance. The UAV was flown for one week from the Norwegian coastguard icebreaker "KV Svalbard", and from the island itself for two weeks, from 25 February-15 March.

"The batteries need to be warm [because the cold reduces their lifetime]," says Martin Mueller Engineering chief executive Martin Mueller. "They were warmed up to 40 degrees C before being placed in the Funjet," he adds.

The scientists used a pilot to launch and land the UAV using remote-control, but above 1,600 ft and out of visual contact the Funjet had to operate autonomusly. The UAV was launched from and landed on the icebreaker's helicopter landing deck.