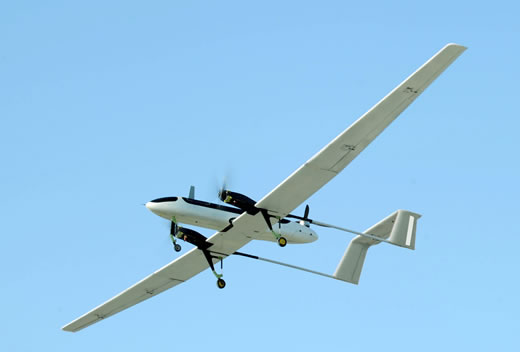 Above: the IAI Panther Unmanned Aircraft

The Panther will be exhibited for the first time internationally at the Association of the United States Army's (AUSA) 2010 Annual Meeting and Exposition in Washington D.C., October 25-27.

This new line of UAVs includes also the "Mini Panther". Based on extensive research and development and IAI's operational knowledge of the challenges of an advanced ground battlefield, the Panther combines the flight capabilities of an airplane with helicopter-like hovering, a tilt-rotor propeller, and a fixed wing vertical takeoff and landing (VTOL) system, which enable a runway-free takeoff and landing on an unprepared area.

The unique concept has been patented by IAI. An innovative automatic flight control system controls the transitions between the hovering takeoff phase to forward flight and vice versa before landing. The Panther takes off and lands automatically by a simple click of the operator console, thus eliminating the need for an external pilot.

Itzhak Nissan, President and CEO of IAI, said: "The Panther's intelligence, surveillance, and reconnaissance (ISR) capabilities, along with its effective use of changing flight dynamics, make it a unique and invaluable asset on the tactical battlefield for the Israel Defense Forces and for foreign customers. We consider the innovative technology used in this system to be ground-breaking."

With its 3 ultra-quiet electrical motors, the Panther, which weighs roughly 65 kg, can loiter for approximately 6 hours, at an altitude of up to 10,000 feet, with a radius of operation of over 60 km.

The Mini Panther, which weighs up to 12 kg, can loiter for approximately 2 hours, and carries IAI's Micro-POP.

The Panther control station, transported on a midsize vehicle, can store up to three aircraft, as well as the ground data link, the support equipment and spare parts, all of which allow the troops' autonomous operation on the field at a tactical level. Two operators control the mission using two fully redundant identical consoles.

The portable Mini Panther system includes 2 planes and a command and control unit, and is carried in backpacks by two soldiers. Both platforms, designed to be entirely automatic, can be controlled by one operator, while the command and control station has two operators to control the station and oversee the mission. Prototypes of the Panther platform have conducted successful flight tests and will be operational by 2011.